As I type this, the Oktoberfest 2019 is going strong in Munich, Germany. And once again I’m celebrating it by posting the sheet music for an Oktoberfest-appropriate accordion arrangement of mine!

This year it’s the Zillertaler Hochzeitsmarsch, which usually gets translated to “Austrian Wedding March”. A more literal translation would be something like “the wedding march of the Ziller river valley“, which is only about 50 miles south of Munich, just over the border in Tyrol. So not technically German, but close enough for the tune to become a beer tent standard.

This is a somewhat advanced arrangement, but it can be made much simpler by making a few adjustments:

On the other hand, if it’s not advanced enough, I’ve included a fun little riff on the last page that I often like to substitute in for the end of the A section, just to keep things interesting. 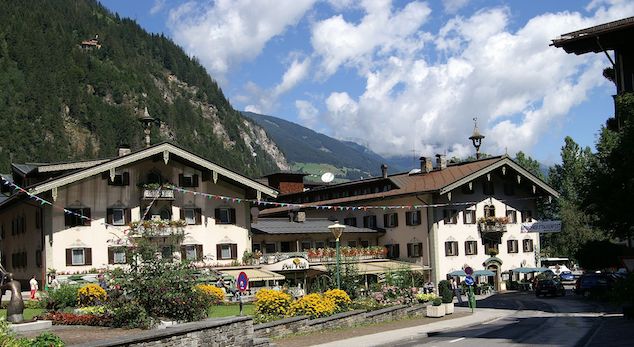 Mayrhofen is the largest town in the Zillertal. Photo Credit: Friedrich Böhringer

Right about the time I’m typing this post up, the Mayor of Munich is getting set to perform the traditional tapping of the first keg of beer as part of the start of Oktoberfest 2018! (Yes, the real “Oktoberfest” actually runs mostly in September.)

Well heck, this accordion blog has an Oktoberfest tradition too–the annual posting of one of my German/Bavarian/Oktoberfest-appropriate accordion arrangements! This year’s tune probably goes by a bunch of different names, but I usually see it referred to as “Tyrolean Waltz” or “Tiroler-Walzer” or something like that. If you’ve spent any length of time in a Bavarian-style beer hall, you’ve probably heard it before.

It’s a lead sheet, so you’ll have to make up your own left-hand accompaniment based on the given chords (the standard oom-pah-pah waltz pattern works just fine). I apologize for how confusing the form might be with all the repeats and coda stuff, but I wanted to keep the chart to just one page. I’ve heard versions where the sections are in different orders–not too uncommon with traditional folk music–so feel free to play the form differently if you prefer.

So download the PDF of Tiroler-Walzer for Accordion and enjoy!

And if you missed ‘em, here are Oktoberfest posts from previous years:

Today marks the beginning of the 184th Oktoberfest in Munich!

If you’re heading there, or to any of the many local Oktoberfest celebrations in other cities throughout the world (such as here in Nashville), you might want to grab yourself a pair of limited-edition Oktoberfest sneakers that German sportswear company Adidas has recently introduced to honor the occasion.

In addition to the lederhosen-inspired coloring and the word “Prost!” (“Cheers!”) stitched onto the side, the shoes also feature a special “DBPR” coating, which Adidas claims stands for–and I am not making this up–”Durable Beer and Puke Repellent“.

Those Germans are nothing if not practical…

Of course, the other thing any respectable accordion player needs when heading to Oktoberfest is a solid repertoire of music to play. So here’s some accordion sheet music for “Drink, Drink, Brüderlein Drink!” (In English: “Drink, Drink, Little Brother Drink!”)

Once again, I have two versions, which you may choose from (or combine) to suit your playing ability. The basic version should be playable by anyone who has gotten through most of Palmer-Hughes Book 2. The other version has some tricky stuff more suited to graduates of Book 4 at least. 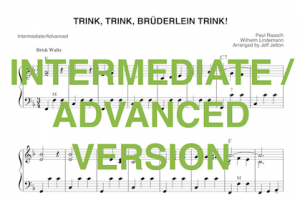 P.S. Here are my Oktoberfest posts from previous years:

One of the cool things about the accordion is that it spans so many cultures and languages. You can hear the instrument in Polish polkas, French bal musette, Irish jigs… the list goes on. (Literally:  There’s an actual list.) I’d guess that probably only the violin/fiddle is more ubiquitous in the traditional music of so many people. 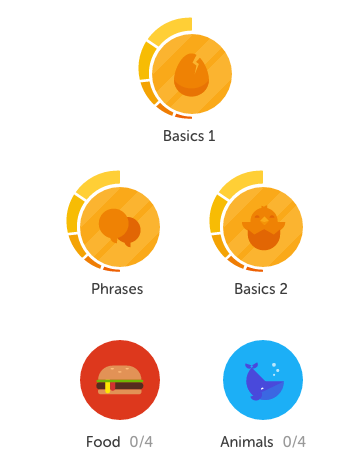 My Spanish progress so far on Duolingo. You gotta start somewhere…

When you play such a multicultural instrument, it can be handy to learn some of these spoken languages too. Knowing a few words of Italian, for example, makes playing all those Italian accordion standards that much more interesting.*

So far I’ve managed to learn a bit of what I call the “opera languages” (Italian, German, and French). Nothing fancy… mostly just enough to order something in a restaurant or bar while traveling. My German is even passable enough by now to have a rudimentary conversation, provided a few charades-style hand gestures are allowed.

But now I’ve decided to learn some Spanish. I really don’t know why I’ve put it off so long since, in this country, it’s so widely spoken and there are so many convenient opportunities to learn and practice it. Plus it has so much great accordion-based music!

With all that in mind, here’s a good Spanish-language song to know: De Colores. The exact origins of the song are a bit cloudy, but it’s a fun tune with a wonderful sentiment about different colors (both literal and figurative) adding up to so much beauty in our world. 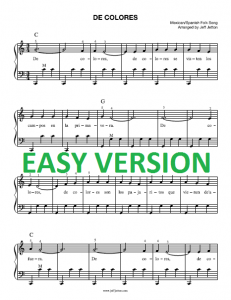 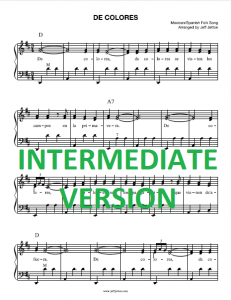 * Technically, the lyrics of many Italian standards, such as ‘O Sole Mio, are actually written in Neapolitan dialect. Knowing standard Italian only gets you so far! Same thing happens with German music–a good portion of it is sung in a Bavarian dialect that is significantly different from standard Hochdeutsch German. 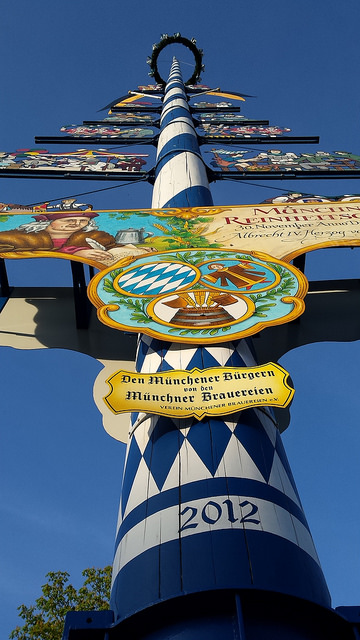 The 183rd Oktoberfest starts in Munich today, and, as in years past, I’m posting one of my arrangements for you to play on your accordion for the occasion. So I guess it’s officially a jeffjetton.com tradition!

This time, I picked an Oktoberfest song that I’ve seen referred to by several names:

Whatever you call it, it’s a fun, goofy song that’s easy for everyone to sing along to. Not to mention easy to memorize–it’s basically just a couple of riffs repeated over and over again. The only challenge is keeping your key signatures straight.

It’s also fairly easy to play, although you can make adjustments as you wish:

So give it a download, grab your accordion, and enjoy! 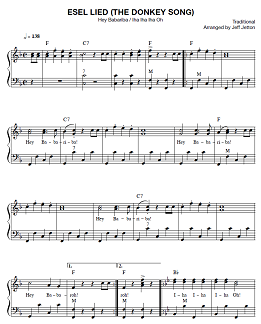 St. Patrick’s Day is coming soon, and if you’re an accordion player, you’re going to want to know an appropriate song or two. Well here’s arguably the single most famous Irish jig for you:

Granted, in certain “serious” Irish Traditional Music circles this tune is considered quite daggy and overplayed. (You wouldn’t want to start this one off in a session, for example.)

Elsewhere though, it’s an instantly-recognizable crowd-pleaser that’s perfect for setting the St. Patrick’s Day mood. It can be a lot of fun to play too!

In my arrangement, notice how the bass note usually doesn’t play in the second part of the measure unless you’re changing to a new chord there. That’s a good way to give the melody a bit of space while still providing a solid rhythm. And in this sort of music, the melody is king! (In fact you might want to omit the left hand entirely the first time through and only bring it in the second time around.)

This time last year I posted a few free arrangements of Auld Lang Syne, for any accordion player out there who happened to find themselves in need of playing along on New Year’s Eve.

But did you know that the familiar song we all know may not actually be the original version? There’s evidence that Robert Burns initially set his lyrics for Auld Lang Syne to a slightly different melody, only later having it changed to the one most of us know today.

And while Burns himself was reportedly not too fond of that first version, I think it’s by far the superior of the two. Some traditional folk singers, such as Mairi Campbell and Jim Malcolm, have recorded wonderful versions of the original melody. Give them a listen and see what you think…

And if you want to play it yourself, here’s the sheet music for an accordion arrangement of it I put together (inspired largely by the Jim Malcolm version):

(I’m using a lot of left-hand minor-seventh chords in it. If you’re not used to playing them, it may take a bit of practice. The basic idea is that you play the root of the chord on the counterbass row, then add a major chord button from one row higher–that is, closer to your chin. So a Bm7 chord would be the counterbass of G, which is a B bass note, played along with the D major chord button.)

Enjoy! And have a great new year!

Let’s face it, if you’re an accordion player, this is that time of year when you might be called upon to play “Auld Lang Syne”.

Maybe you’ll be at a New Year’s party. Or perhaps at a Burns Night supper. Or maybe you live Bedford Falls where, inexplicably, they sing the song on Christmas Eve…

(Seriously… what is up with that?)

In any case, I’m here with three free arrangements of Auld Lang Syne for accordion to help you out. There should be something here for every playing level:

Best wishes for a happy and music-filled holiday season!