The must-read of the month is this touching article about JoAnne Bjerke, who doesn’t let her age or her Alzheimer’s diagnosis keep her from sharing her accordion talents with others: 87-year-old accordion player sets toes a-tapping at Tri-City senior facilities

It’s the music, my dear, that keeps you young. I play almost every day, either for other people or just myself. It’s important that people keep music in their lives because they will not only live longer, they’ll be happier and feel better at the same time. [...] Just wait until you’re old, you’ll see what I mean as long as you keep music in your life.

Actress Donna Garner was almost perfectly suited for the part of the accordion-playing Czech mother in the musical “Once”. The only problem? She didn’t know how to play the accordion, and the audition was in eight days… Once:  A musical with a different kind of love story

The Santa Cruz Sentinal quickly responded with an editorial.

Kudos to Arsenal player Laurent Koscielny for kicking in (see what I did there?) some of his own money to help save France’s oldest accordion factory. Yet another reason why Arsenal is my favorite Premier League team, even if they do always try to walk it in…

Finally, in defense of North Dakota’s decision to spend tax dollars to buy a certain piece of accordion history, Clay Jenkinson asks, “When did we get too sophisticated to honor Lawrence Welk?”

I know the Welk farm is out of the way… You have to want to go there, and when you get there, out there in the middle of nowhere, there is not very much to see. Maybe that IS the point. Welk should be a hero to every dreamy North Dakota kid who wants to start a band in his garage, every fifth grade doodler who dreams of being Michelangelo, every shy farm girl who dreams of being a Rockette or performing with the Berlin Philharmonic.

You might have noticed the appearance of a new “links” section on this website. I’ve finally collected in one place a list of the various things I wind up recommending to people from time-to-time.

I’ve included some of my preferred accordion music books, a short list of good accordion retailers and repair shops, CDs that are worth a listen, etc. There’s even the make and model of my favorite instrument of student torture (my metronome) for anyone who is curious. Check it out! 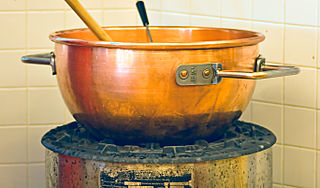 With apologies to Julie Andrews, my list does not include any bright copper kettles. (Photo Credit: Wikimedia Commons)