In the ’60s, when electric guitars were first beginning to outsell accordions, Faithe Deffner and Bill Palmer got together and designed an instrument that they “hoped would enable the young accordionist to enter the rock scene”. The result–initially sold under both the Titano and Pancordion brands–was the “Tiger” accordion:  The accordion industry’s last-ditch effort to stay relevant in a musical landscape that was inexorably changing. (Spoiler alert: It didn’t work.)

I’ve wanted to get my hands on one for ages, so when a pristine-condition model showed up on Craigslist, I had to snap it up! Let’s take a look at this wonderful piece of accordion history… 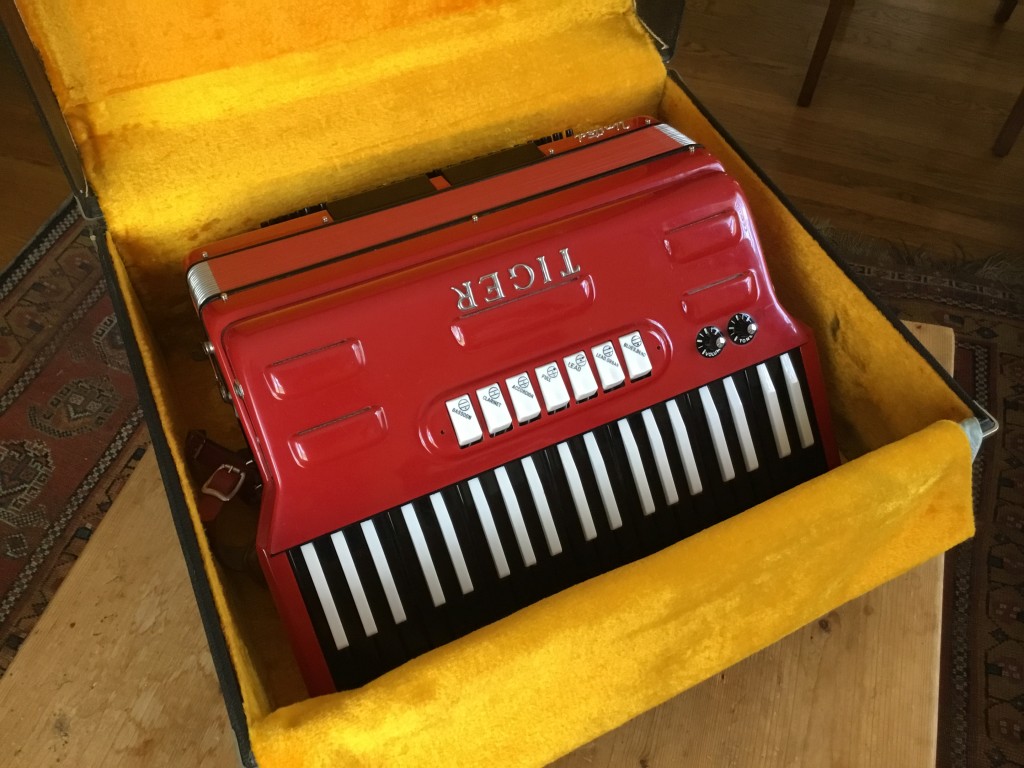 The Tiger was also available in “Sand” (sort of a dusty yellow) and “Blue Moon”. All three colors tended to fade with age and exposure to light, so I’m guessing mine was kept in storage for decades.

As distinctive as the color is, it’s the keyboard that really makes the Tiger stand out.

As Bruce Triggs points out in his excellent overview of the instrument over at Accordion Uprising, the inverted-color keys were almost certainly inspired by the then-popular Vox Continental electric organ. That, plus the stylish keyboard angle, were–according to ads–intended to show off the accordionist’s “flying fingers”. (A seldom-reported bonus of the swept-back keyboard: It’s super-easy to tuck the straps in underneath the accordion when putting it back in the case.) 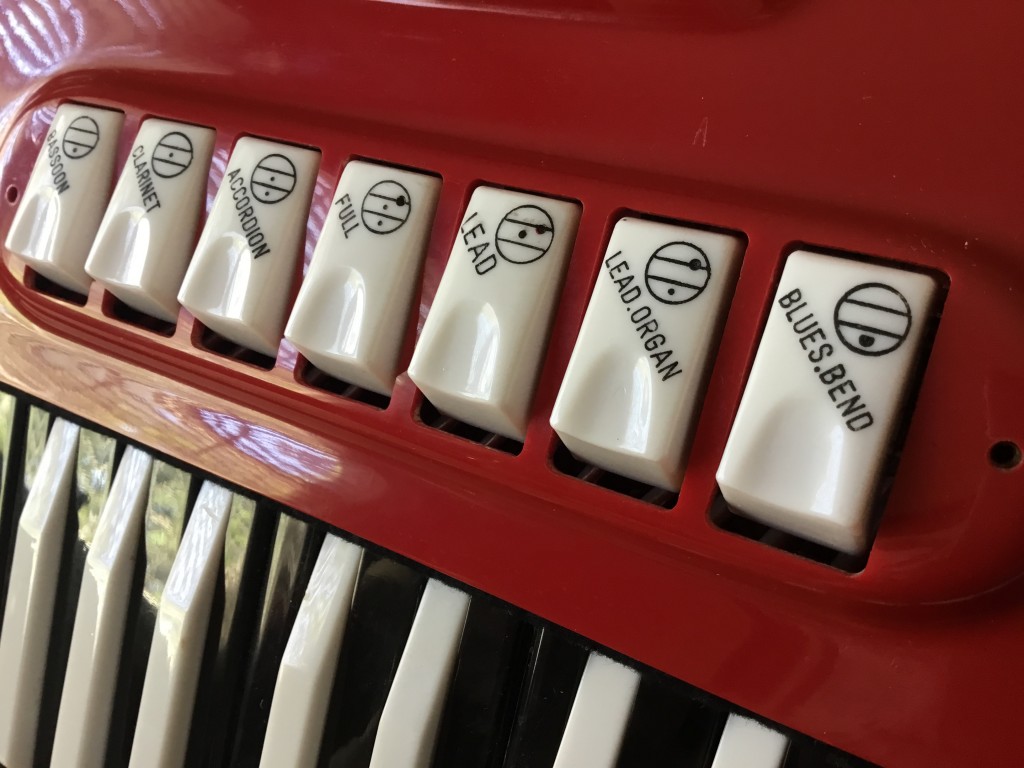 Here’s another unique, organ-inspired feature of the Tiger accordions: In addition to the usual low (Bassoon) and middle (Clarinet) reed sets, there’s a “Quint” reed that’s tuned a fifth above the middle reed. And while most Tigers had just the first six switches, I was lucky enough to find one of the rare models with the extra “Blues Bend” register. More on that in a bit… 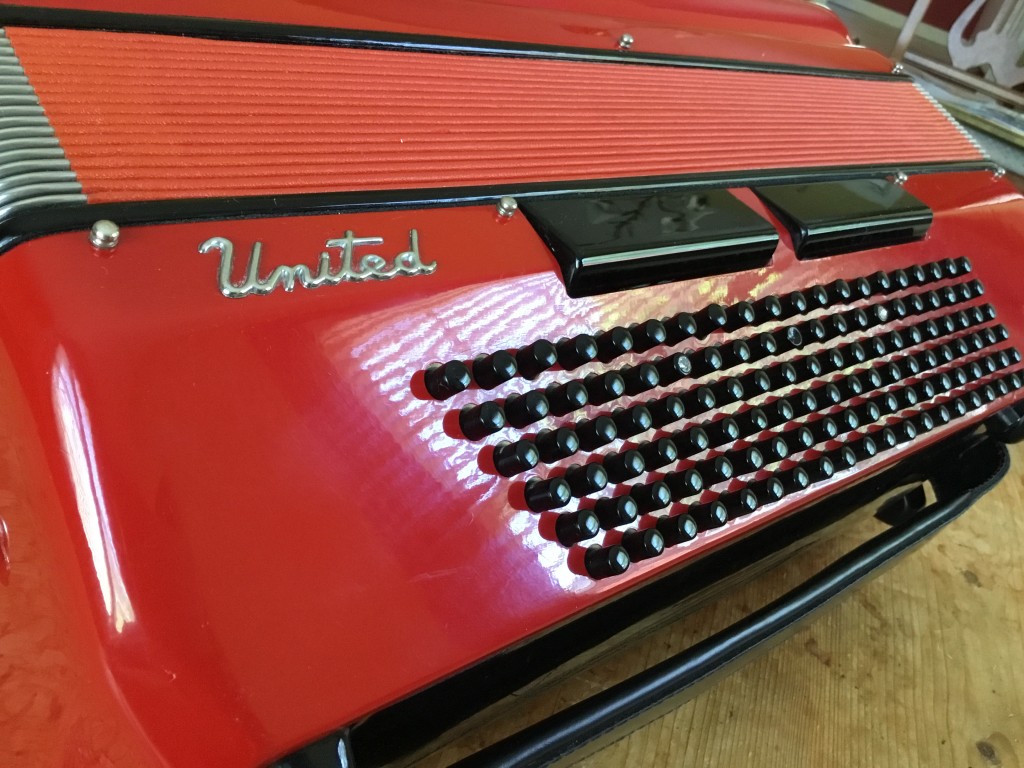 This one sports a “United” brand label rather than Titano or Pancordion. I’m guessing United (maybe an accordion store or school?) worked out a re-badging deal with the Deffners. Also notice the two switches. Unlike most Tigers, which only had one unchangeable left-hand register, this model gives you the option to cut out the lowest reed. Quite useful when playing in a rock band, I’d imagine! 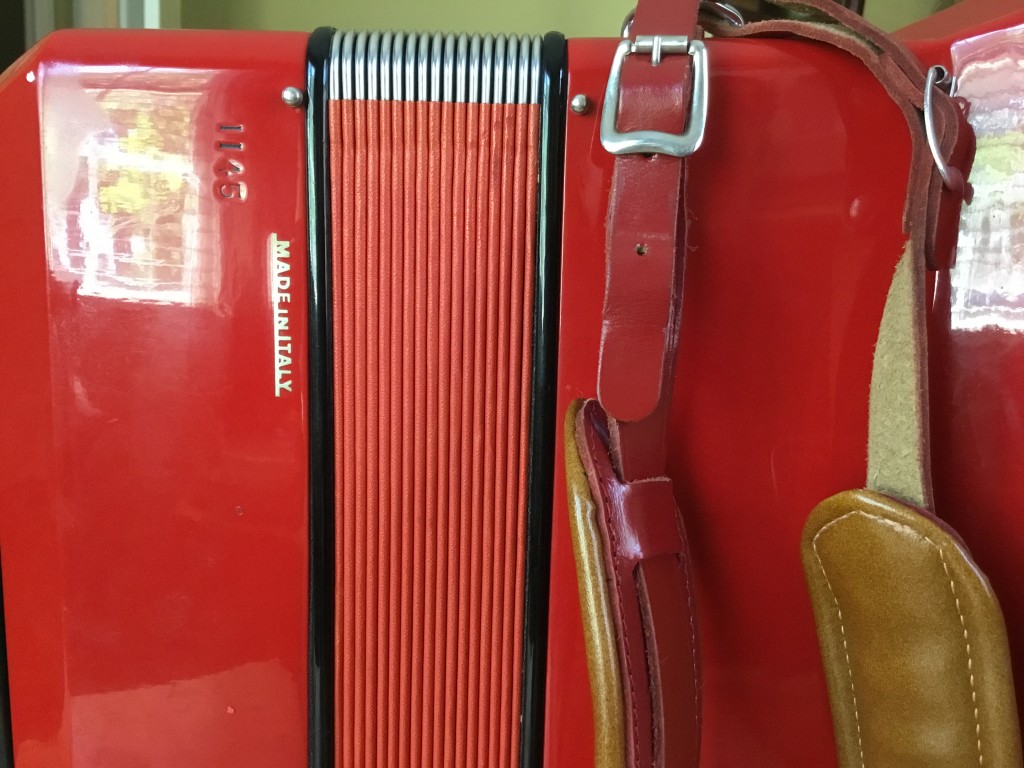 The color-coordinated leather straps are still in great shape, considering they’re over 50 years old. Oh, and that “Made in Italy” stamp is not a misprint. Despite Tigers being designed and sold by a US-based company, they were actually manufactured in Castelfidardo, Italy by Crucianelli.

Okay, so that’s the outside. Let’s open things up and see what makes it tick! The front grille comes off after removing a couple of small screws on the side:

Since Tigers were intended to be played in a (presumably loud) rock band, they came with an audio jack so you could plug them into an amp. I expected to find a couple of small microphones under the front grille, but there’s nothing here but some wiring and a small bit of circuitry for the two front-panel knobs. So where are the mics? 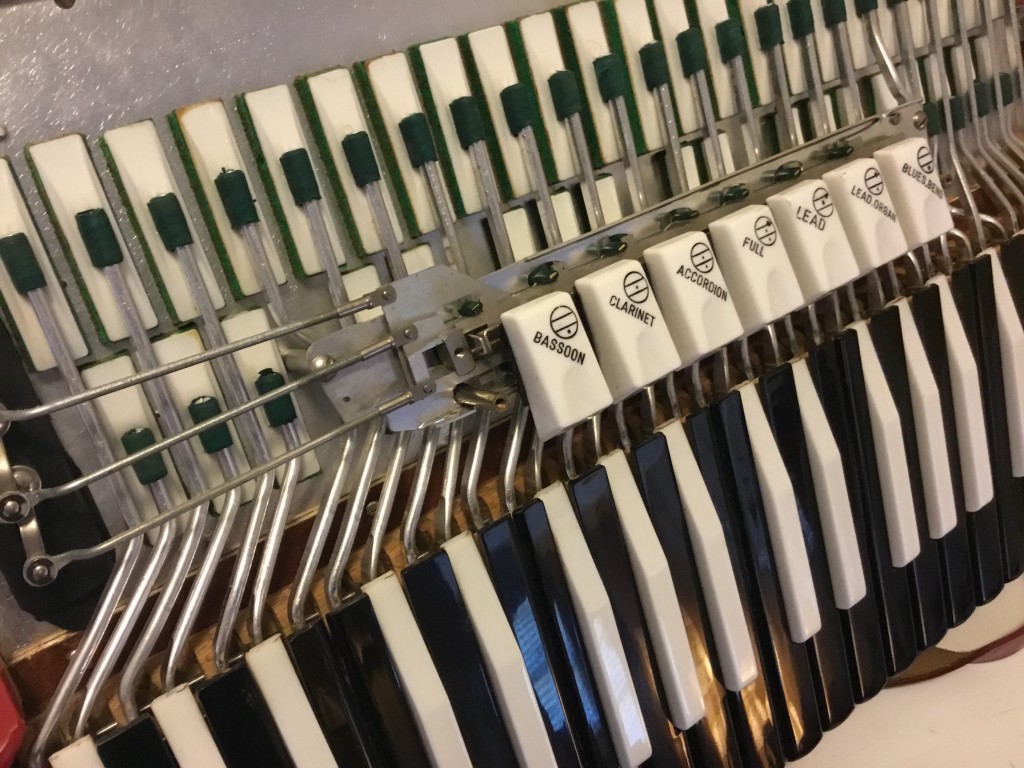 A closer view of the treble-side mechanism. 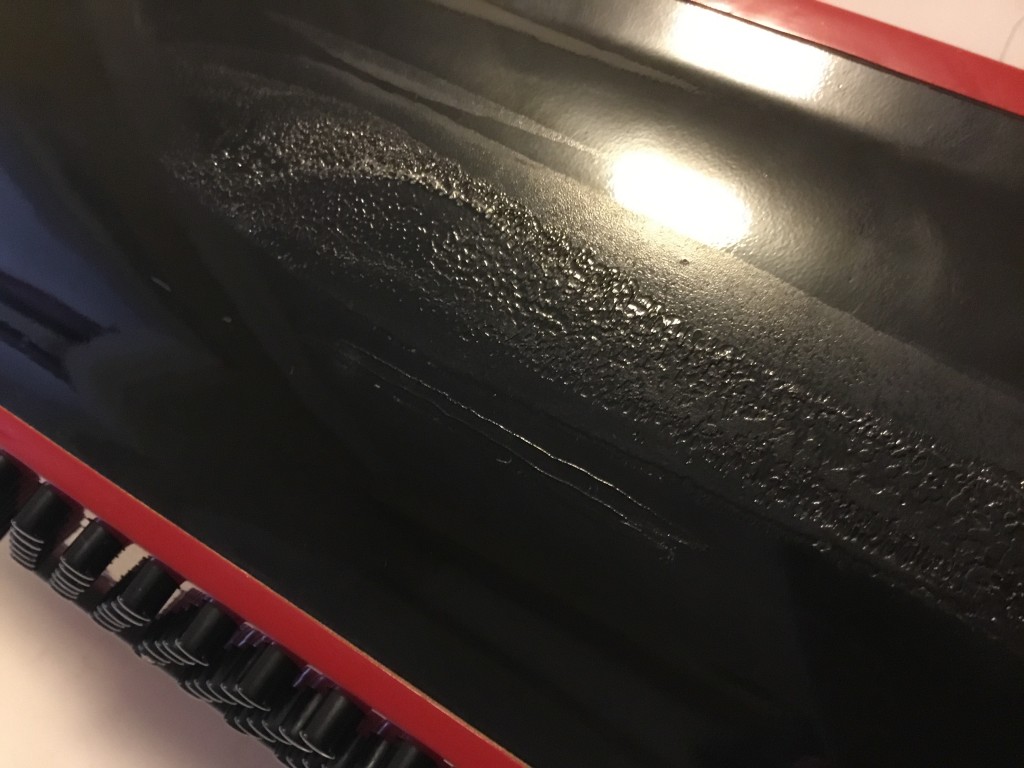 To open up the bass side, like most accordions, you simply loosen the hand strap until it detaches completely on that end, then remove the palm rest panel (usually via a few screws). It’s tough to tell from this photo, but the Tiger’s plastic palm rest has a nice rounded shape to it. More obvious is the weird bubbling/scarring on this one. Looks like fire or heat damage. I wonder if a previous owner took a lighter or something to it in an attempt to “roughen up” the surface and keep their hand from slipping? 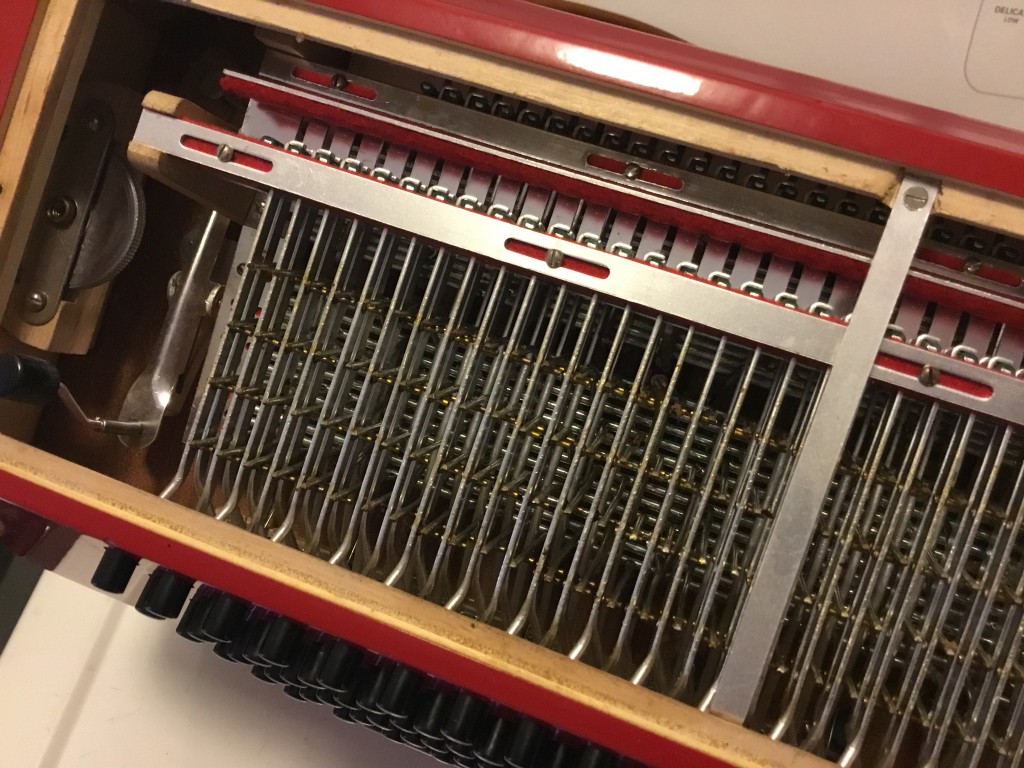 Pretty straightforward bass machine. I hope I don’t ever have to do any repairs on this side. It does NOT look like it would be any fun. Oh, and no microphone in here either. Hmmm… 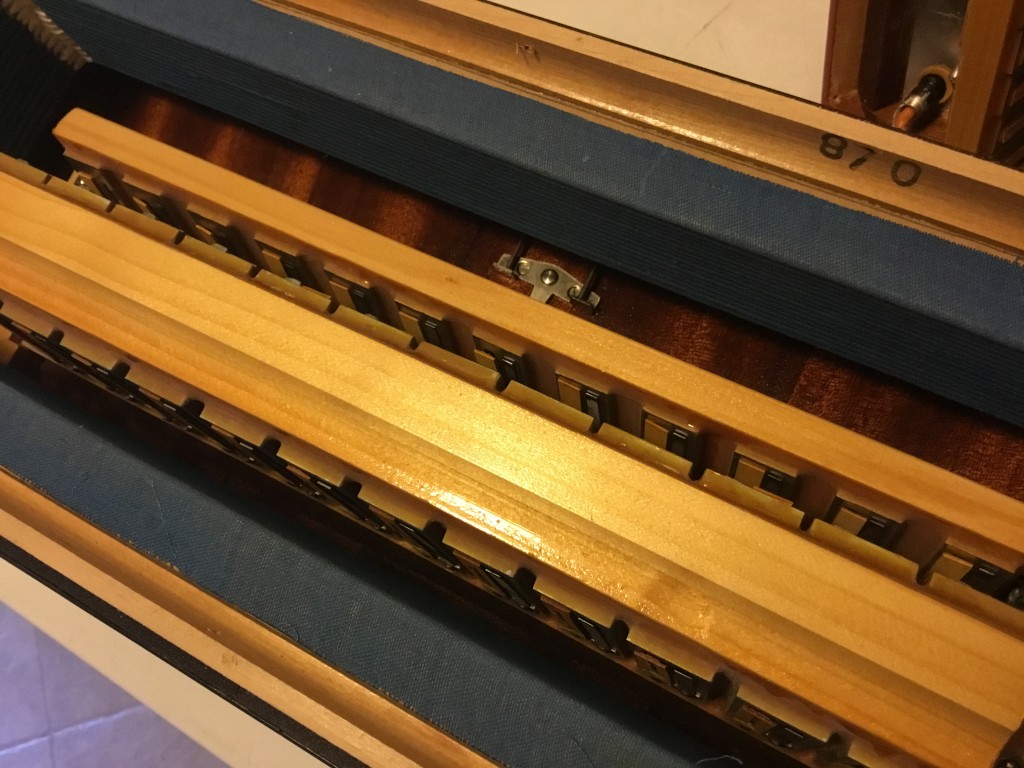 Here are the reeds on the bass side. The leathers could be flatter, but overall aren’t too bad given their age. Notice that the wood in the back is stained a lovely brown. A nice touch for a part of the accordion most people will never see. Still no microphone though… 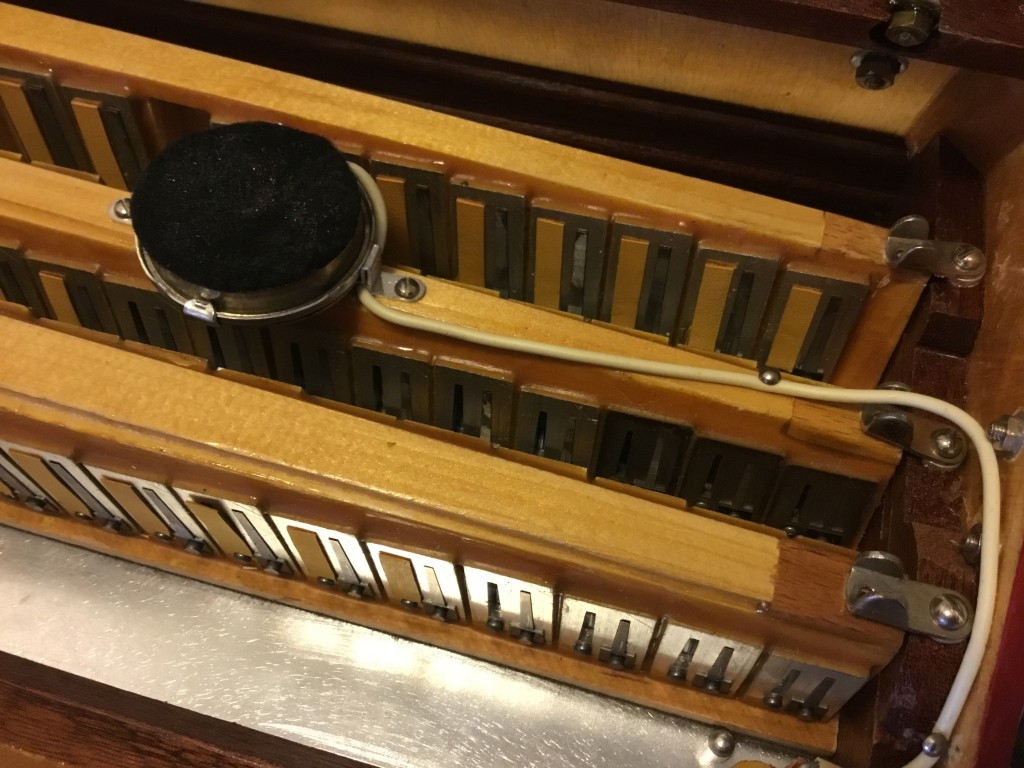 Here’s the treble side. A-ha! There it is! A single, humongous, piezo microphone serves as the pickup for the ENTIRE accordion. (I guess that explains why there’s no left-side/right-side balance knob.) Not exactly an audiophile solution, but they were trying to keep the price down after all. 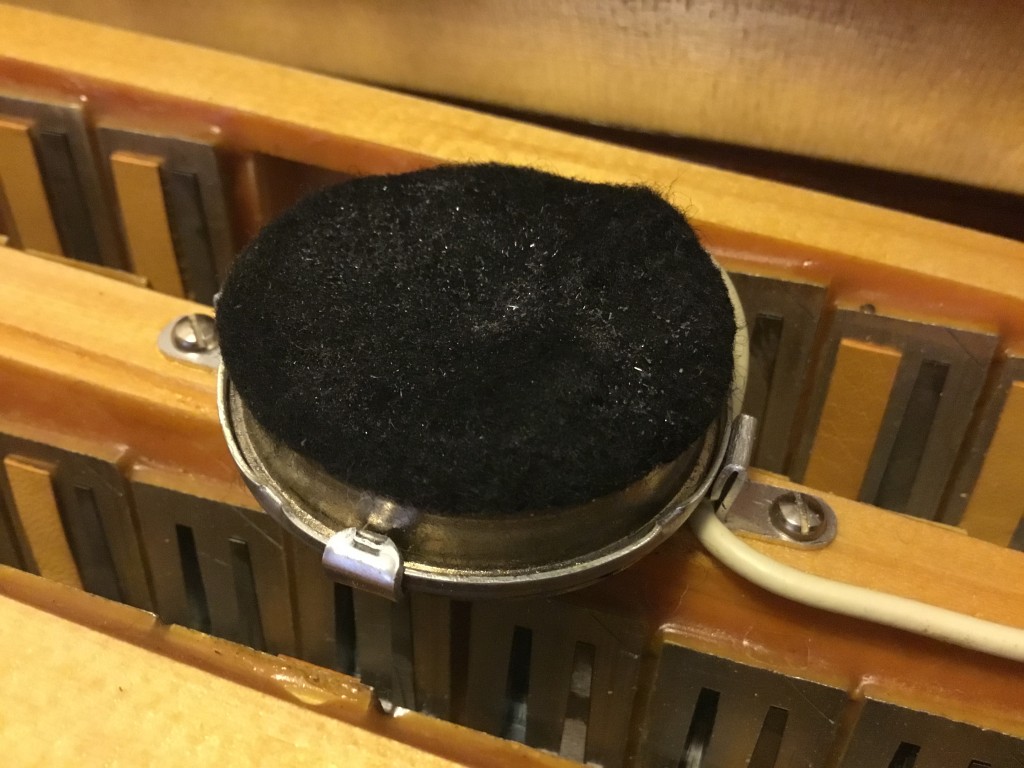 A close-up of the lone microphone. 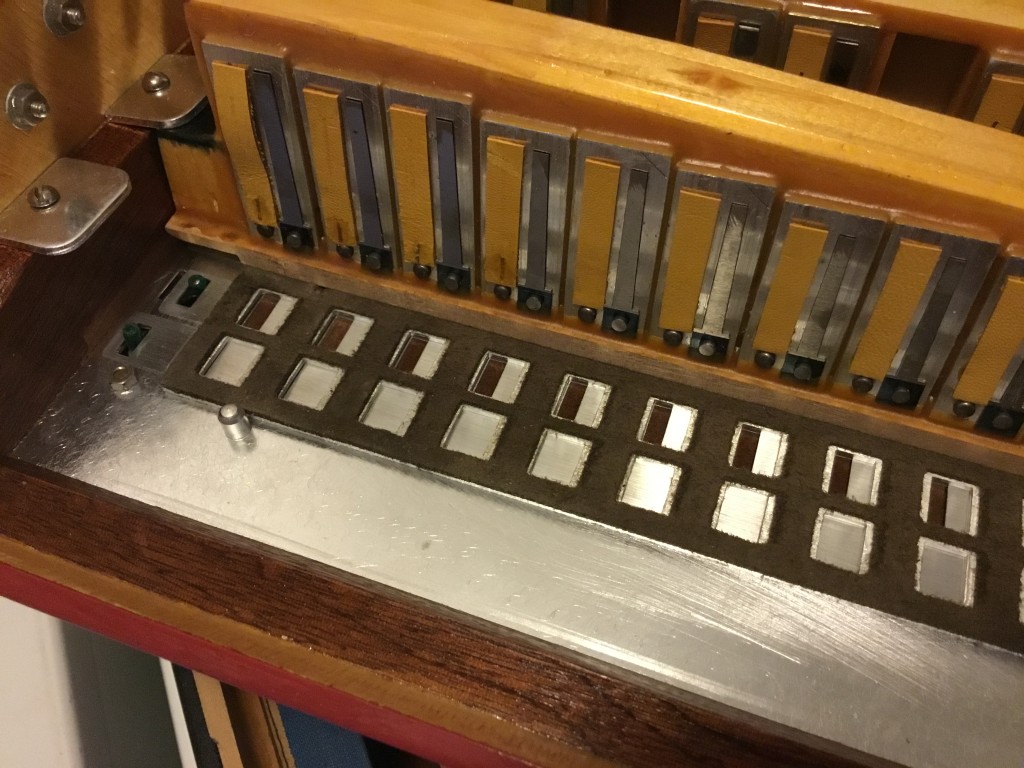 I’ve removed one of the reed blocks so we can get an eyeful of that beautiful, Italian-crafted wood. I also switched the accordion to the “Blues Bend” register, and you can now see what that does. The bassoon reeds are opened only halfway! This restricts airflow and makes it possible to “bend” the pitch of the note down about a half-step by forcefully increasing the bellows pressure. I haven’t found it to be too useful in practice, but it’s still a fun feature to have.

So how’s it sound? I put a short snippet up on Instagram if you want to give it a listen.

Ultimately, the Tiger accordion proved to be no match for the electric guitar. Mrs. Deffner put the blame largely on the stodgy instructors:

Unfortunately, the accordion teachers of that period did not like rock and were convinced that it was a passing fancy. None of them wanted to teach it to their students. Needless to say, the Tiger Combo ‘Cordion did not impact on the rock world as we had hoped for it to do. There are however, still a number in circulation and many favorable comments have been heard over the years. (My husband sometimes referred to the concept as “Faithe’s Folly,” but he was always good natured about it.)

Honestly, even if accordion teachers were eager to teach rock-and-roll, I’m not sure it would’ve helped much. If you were a kid in the ’60s and tuned your radio to a rock station, you would certainly hear a lot of guitar, bass and drums. Probably some saxophone too. You would pretty much never hear an accordion. So why in the world would any aspiring rock-and-roller of that era buy an accordion–even one as undeniably cool as the Tiger?

Funny enough, sales of electric guitars are now dropping due to music largely being made on laptop computers these days. I wonder if some enterprising guitar company, in a desperate final attempt to appeal to popular tastes, will try to design a guitar specially-designed to interface with ProTools, trigger loops and beats, and stream podcasts or something?

If so, I hope they’ll learn a small lesson from an old accordion called the Tiger.