One of the most “Nashville” things you can do in Nashville–the Full Moon Pickin’ Party–is celebrating its 15-year anniversary this summer. The event series, held on weekends in the summertime whenever there’s a full moon (or close enough to it), features:

But the really great thing about the Pickin’ Parties? If you do show up to jam with a bluegrass instrument, admission is sharply discounted to only $10. (And yes, that sill comes with four beers!)

Note that the discount specifically applies to bluegrass instruments. Obviously they want to keep things bluegrass-focused and are trying to discourage djembes and didgeridoos. Nor do they want people brining in their old plastic recorder from grade school just to get a beer discount. Makes sense.

But it does raise the potentially sticky question:  What is a “bluegrass instrument” anyway? Turns out they actually provide a list:

Wait a minute… did I just see accordion on that list? Bluegrass accordion! Is that even a thing?

Well it is. Mostly due to this woman: Wilene “Sally Ann” Forrester: 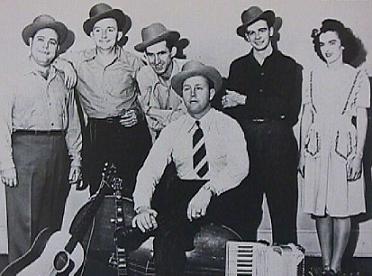 She was the first “non-boy” member of Bill Monroe’s Bluegrass Boys, and she played accordion with them on tour and on several records in the ’40s.

Bluegrass purists might argue the point, but as far as I’m concerned, if Bill Monroe let an accordion in the band, then it by-golly counts!

I’m thankful that the folks behind the Full Moon Pickin’ Parties dug into their bluegrass history and have made their event accordion-friendly!