There’s an oft-repeated story–I’m sure you’ve heard it–about how, if you place a frog in a pot of boiling water, it will jump right out. But if you put it in pleasantly warm water and very slowly increase the temperature, it will allow itself to be boiled to death without so much as a “ribbit” of protest. 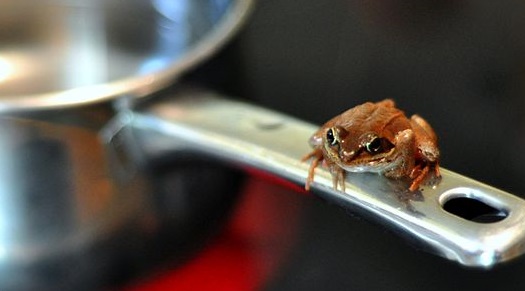 This is most likely not literally true. But that’s okay. We’re more interested in the metaphorical truth of the story:  It’s difficult to notice change when it’s gradual and slow.

As musicians, we especially have to be on alert for this condition because it can hit us in two directions. The first direction is like our poor frog friend–we don’t see things deteriorating until it’s too late. Maybe it’s our playing skills that we let get a bit more rusty each year. Or maybe it’s the business/networking side of things.

But as students of music (and we’re always students, ideally) it can go the other direction too. We often don’t notice ourselves getting better. Improvement happens notoriously slowly in music, and it doesn’t call attention to itself nearly as loudly as our inevitable mistakes and backwards steps.

So what can we do about it?

Here are two ideas. First, record yourself frequently. Not only does this help you improve faster in the first place, it also serves as an audio record of where you used to be. I cringe with embarrassment when I hear stuff I recorded years ago. That’s a good thing, because it tells me that I’m better than I was.

Second, revisit old material from time to time. If you’re an accordionist, dig out that old copy of Palmer-Hughes book 1 and play “Vegetables on Parade” again. Or if you’re a Suzuki-trained violinist, you might run through “The Two Grenadiers” for old times’ sake. You get the idea.

Remember how you used to bang your head against the wall over these? Hard to believe, isn’t it?

Maybe you’re getting better after all.